LAP — The votes have been received and thanks to community feedback, two award-winning bands, selected by Lapeer Days attendees, will take to the main stage at this year’s free festival taking place August 19-21 downtown by Lapeer.

“The selections for these two groups came from the poll we conducted on social media,” said Neda Payne, executive director of the Lapeer Area Chamber of Commerce.

Lanco continues to forge new territory after roots frontier explorers and live performance junkies alike broke out with the multi-week platinum No. 1 hit “Greatest Love Story.” Creating a rocker at the heart of a new generation, the band followed up with Billboard Country Albums chart-topping “Hallelujah Nights,” marking the first country band to debut at No. 1 in a decade. Additionally, Lanco scored another platinum-certified hit with “Born To Love You,” ahead of the release of their new anthemic Honky-Tonk Hippies EP, which was self-produced by the band, with each track written by at least two members. The group traveled to the iconic Fame Studios in Muscle Shoals, Ala. to record new music, absorbing its thrilling and earth-shattering influence.

As Lanco continues to “bring the full band sound home” (Newsday), the five-man band will build on their deep-rooted connection with fans during their headlining Honky-Tonk Hippies Tour.

On the main stage at 10:30 p.m. on Saturday August 20, presented by Lapeer Days main sponsor, DTE Energy, is Soul Asylum.

A Grammy-winning, multi-platinum rock band, Soul Asylum began as the young Minneapolis punk brothers of the Replacements and Husker Dü. Their breakthrough 1992 album Grave Dancer’s Union featured the international hits “Runaway Train”, “Black Gold” and “Somebody to Shove”. “Runaway Train” won a Grammy and its music video has brought nearly two dozen missing and exploited children and teens from around the world back to their families. 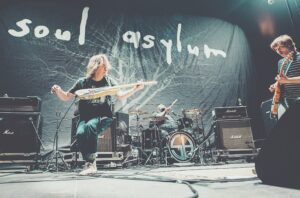 Hurry Up and Wait was released in 2020 to worldwide fan and critical acclaim, earning the band their highest Billboard chart position since 1995’s platinum selling Let Your Dim Light Shine.

Lapeer Days is produced by the Lapeer Area Chamber of Commerce, with major sponsors View Newspaper Group and DTE Energy. Sponsorships and space for vendors are still available. For more information, including how to volunteer at the festival, contact the Chamber at 810-664-6641.

The festival website, www.lapeerdays.com, features the event schedule, entertainment information and new events as they are confirmed. Entry forms for the Craft Show, Vendor Area, Parade, Miss Lapeer Days and more are available on the website under the Forms tab.