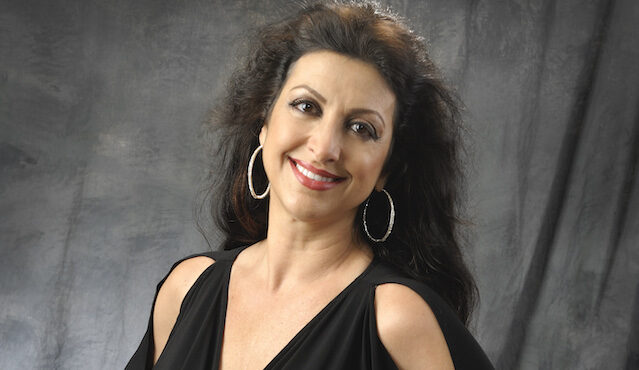 From arias to anthems, standards to stadium rock, Diva Montell takes almost any musical style and makes it her own. Gifted with a powerful soprano voice, Montell’s talents brought her to a crossroads early in her career when she had to weigh what was on her heart against the expectations of others. This journey began at birth.

“Yes, I was born with the name Diva,” Montell says.

“My mother, Concetta Ferreri, was an opera singer who performed with the Apollo Opera Company, Midwest Opera and other venues,” she continues. “After her marriage she had four children but continued to sing at Mass at Our Lady of Pompeii, St. John Cantius and Santa Maria Addolorata. My father, Freddie Montell, made his living as an artist at places like Mr. Kelly’s, the Starlight Lounge and Chez Paul. Our last name is Montalto, but Dad took Montell as his stage name and I did the same.

Montell was born in the Italian enclave of Chicago around Grand, Ogden and Racine, spending time in her grandmother’s eight-apartment apartment building. “There wasn’t a lot of green space in the neighborhood, but our homes were filled with family, friends, food, faith, and most importantly, music,” she recalls.

“When I was 6, Mom would sing ‘O Mio Babbino Caro’ while she was cleaning, and I started singing it with her,” Montell says. “At that moment she realized that I had a talent for opera.”

With the change in the old neighborhood, the family moved to Western Springs when Montell was 7 years old. In college, she was hesitant to take the lead and fully express herself as a singer. One day, her choir teacher gave her an ultimatum: “With a name like Diva, you’d better learn to sing, otherwise you’ll be worthless!”

Montell’s talent was evident, not only to his parents and middle school teachers, but also to the wider educational and musical communities.

“I got a scholarship to DePaul University, where I studied with Dr. Frank Little,” Montell says of the tenor who performed with the Metropolitan Opera and once gave a private performance on commission. for Pope John Paul II. “I was one of only three students, and when Dr. Little moved to New York, I continued my studies at the American Conservatory of Music at his request.”

With talent comes enormous pressure, and Montell began to feel that she was being dragged into a career that was not entirely of her choosing.

“Studying opera was so intense. The engagement was just breathtaking,” says Montell. “I love all kinds of music, but I couldn’t sing anything other than opera. Then I started to learn more about Renata Tebaldi.

One of the great opera singers of the 20th century, Tebaldi performed in over 1,000 operas and was a favorite of Arturo Toscanini and Riccardo Muti. His fame, however, comes at a price. “She never married, couldn’t be a mom. She had no personal life. It was all career, career, career,” Montell says.

So Montell took off – literally – as a flight attendant for American Airlines. After returning to the Chicago area, she opened her own business, Montell Personal Staffing. “Business was booming and the work was very rewarding,” says Montell. “I have been able to help thousands of people and shape many careers.”

Montell also achieved one of the goals Tebaldi failed to achieve, becoming a mom. As her children grew older and were more independent, she started singing again.

“I played what I loved at the time, pop and disco, at Al di La in Oak Brook on Tuesday nights,” Montell explains.

More gigs followed at places like Volare’s, Capri’s Steakhouse and Onesti’s Supper Club. “Ron has been a friend since his days working with me and my aunt, Mary Scalera, fundraising for Villa Scalabrini,” Montell says. “I was opening for The Drifters one night when he came in. It was a great show, the audience loved it and we reconnected.”

Onesti has since featured Montell in opening shows for KC and the Sunshine Band and Michael Bolton; at Chicago’s Italian festivals on Taylor Street and Oakley Avenue and in Milwaukee; and at the Des Plaines and Arcada theatres.

The community showered her with accolades, including a da Vinci Award from the Order of the Sons of Italy, a Joseph Cardinal Bernardin Humanitarian Award from the Joint Civic Committee of Italian Americans, and an Impresa Award from the JCCIA Women’s Division.

In the meantime, she took opportunities to explore her musical options and expand her repertoire. “I like Ella Fitzgerald jazz and scatting, Donna Summer disco, Barbara Streisand or Celine Dion ballads, Madonna pop,” Montell says. “That’s exactly what I can think lightly. There are many more.

The music of Etta James and Frank Sinatra is also within his musical reach, as are the modern pop sounds of Jennifer Lopez, Norah Jones and Alicia Keys – and his covers of Cher will leave you speechless.

Montell performs solo and with longtime collaborator in opera performances, Jeorge Holmes. But she is really capable of letting go with the group EZFM Yacht Rock.

“We do music from the 70s and 80s, by artists like Christopher Cross, America, Pablo Cruz,” says Montell. “I usually do the female parts, singing songs by Carly Simon, Carole King and Linda Ronstadt.”

While covering the Ronstadt and King classics requires some pretty diverse vocal chops, Montell turns up the heat even further with another vehicle, Heart to Heartbreaker. The band takes audiences back to the 80s by performing the hits of hard rockers like Heart and Pat Benatar. Montell’s unique array of talent propels the band to heights rarely achieved by other tribute bands.

During a recent performance at Parkway Bank Plaza in Rosemont, Montell took the stage as Ann Wilson of Heart. While many can mimic the sounds of pop superstars like Wilson, Montell is one of the few who can match Wilson’s range and power.

Performing to a crowd of thousands, Montell delivered renditions of “Crazy on You” and “Magic Man” that were more than mere notes. It was musical flashes that crossed the square, inspiring a combination of astonishment and applause.

As she ended the show with more vocal pyrotechnics on “Barracuda,” Montell stared at the crowd, all arms raised in the air, clapping in unison. As she left the stage, applause echoed throughout the arena.

Meanwhile, his father’s words echoed in his head. “Dad said, ‘Sing what you love, what’s in your heart, and your soul will connect with others,” Montell recalled. “He was such a wise man.”