A group of soldiers sent to the Scottish Highlands for special training maneuvers face their greatest fears after meeting Captain Ryan, the sole survivor of a special ops team that has literally been torn apart. Ryan refuses to divulge his mission even though whoever attacked his men might be hungry for a few seconds. Help arrives in the form of a local woman who shelters them in a deserted farmhouse deep in the forest…but when they realize they are surrounded by a pack of bloodthirsty werewolves, it is obvious that their nightmare has only just begun!

For thoughts on soldier dogs, please check out my article on The Video Attic:

Scream Factory Presents dog soldiers with a terrific 2160p transfer in its original 1.85:1 aspect ratio from a 4K restoration of Original Camera Negative by Second Sight Films with Dolby Vision/HDR. This film was originally released on Blu-Ray by Scream Factory seven years ago, but this release is notoriously poor thanks to the fact that it was derived from theatrical copies due to the inability to find the original elements of the film. Thankfully, a lot has changed in the years since, and we finally get the film in all its 16mm glory with a transfer overseen and approved by director Neil Marshall and cinematographer Sam McCurdy. In terms of movies that desperately needed an upgrade after being botched on Blu-Ray, this one was among the top entries.

Those expecting a traditionally handsome transfer may want to adjust their expectations; this presentation rocks our world. but that’s because it retained its grimy, filmic 16mm roots. The film’s sumptuous natural grain allows for a great level of detail and clarity in the natural environment, production design, special effects and more. The texture on display in the gory makeup, outfits, and in the cabin is amazing. The special effects feature an impressive clarity that makes the work all the more visceral, like when the torsos are ripped apart. The grit resolves incredibly well, with nothing feeling too gritty, even in smoky or murky environments. This transfer did a great job of cleaning up a lot of the print damage, although a few smudges did come through the restoration glove. This presentation preserves the original look of the film with the added resolution that makes the elements more immediate and natural.

While not a movie bursting with vibrant color, the Dolby Vision presentation with increased color output is sure to impress with its depth and nuance. While the lion’s share of the film takes place in a darkened cabin at night, there’s a world of nuance to be found in this setting with the more chilly daytime scenes. The new presentation features colors in production design and effects such as fire orange or free-flowing blood that surges from the screen with unforgettable intensity. Lighting is a huge part of building this film’s tension and this record easily handles every slight change in environment. Black levels are very strong with almost no crushing present, and white levels show no evidence of blooming. There don’t seem to be any jarring digital anomalies such as compression artifacts, banding, or any other such nuisance. In terms of capturing a movie’s intended aesthetic, the Scream Factor team has a winner on their hands.

The 4K UHD Blu-Ray disc comes with previously released DTS-HD 5.1 and 2.0 Master Audio tracks, both of which serve the film quite well but could have benefited from an upgrade. These older DTS tracks allow for plenty of moments with the immersive sound of wolves descending on the cabin in a memorable way. Although the track uses a powerful soundscape, there are admittedly times when the action could be a little more nuanced in its execution. Fidelity sometimes struggles in the most chaotic settings for sounds to blend into each other rather than having a clear distinction. Environmental sounds such as gunshots and claws against the cabin are rendered with the most authority. The dialogue is far from incomprehensible, but the distinct clarity sometimes struggles as it borders on distortion at times. There’s also at least an audio pop or two that hasn’t been cleaned up since the last time Scream Factory released this one. The score holds up well and is used impeccably to establish the mood of the story. There’s room for improvement, but this audio track pretty much gets you where you need to go. SDH English subtitles are provided for those who wish. 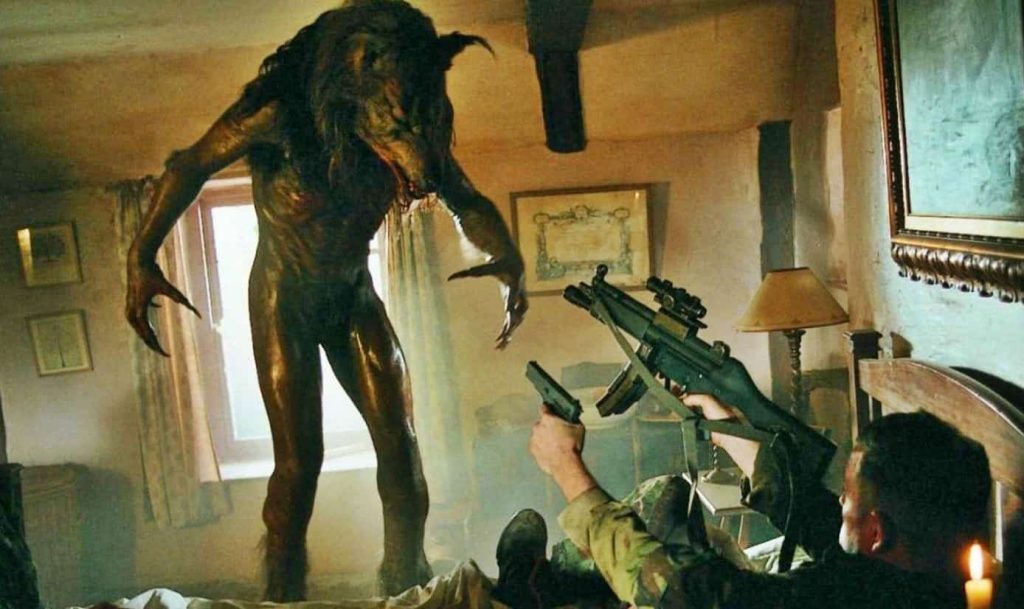 dog soldiers is a terrific feature debut from director Neil Marshall that uses werewolf lore in interesting and thrilling ways, making this particular subgenre feel fresher. While lesser films would have relied solely on crude digital effects to bring those horrific visions to life, which would have aged this film terribly, this one mostly used practical effects that amp up the level of charm. The performances are solid across the board, and the film maintains a strong sense of pacing without overstaying its welcome. This one became a cult hit for a reason. Scream Factory has provided the film with a 4K UHD Blu-Ray version that offers terrific A/V presentation and an assortment of special features you shouldn’t miss. Even if you already own this one on Blu-Ray, you owe it to yourself to upgrade and see this movie in the best possible presentation. Highly recommended

Note: Images shown in this review do not reflect the image quality of 4K UHD Blu-Ray.

Disclaimer: Scream Factory has provided a free copy of this disc for review purposes. All opinions expressed in this review are the honest reactions of the author.